The Sharpton Privilege - Apparent Extortion, Tax Evasion While Being A White House Advisor

Did you know that Sony Pictures Entertainment isn't the first corporation to reach out to the Rev. Al 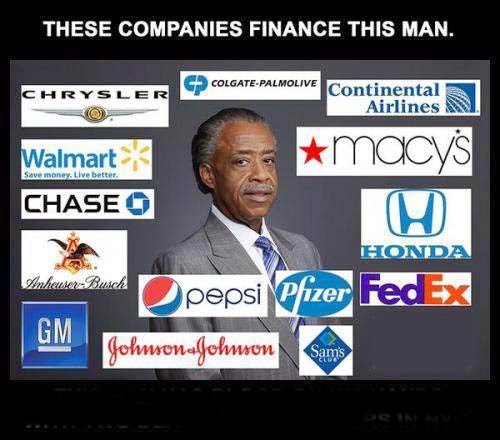 Sharpton for help with its image in the black community?

The New York Times reported in November that records show “more than $4.5 million in current state and federal tax liens against him and his for-profit businesses”.

Sharpton operates like the mob and he’s been getting away with it for years and the New York Post reported Sunday that Sharpton allegedly gets paid to keep from calling the companies racist?

The Rev’s National Action Network is the same organization that the Federal Election Commission found illegally subsidized his 2004 presidential campaign committee, according to the Village Voice which wondered in 2009 why companies and celebrities lend their voice to this corruption run by a tax dodger.

Apparently Sharpton's National Action Network has received hundreds of thousands of dollars over the past decade from companies to keep him quiet, the NY' Post said.

"Al Sharpton has enriched himself and NAN for years by threatening companies with bad publicity if they didn’t come to terms with him," National Legal & Policy Center Ken Boehm told the Post. "Put simply, Sharpton specializes in shakedowns."

Sharpton apparently operates like this, Sharpton confronts a company over accusations of racism. He then meets with company executives, who end up contributing to NAN.

"Once Sharpton’s on board, he plays the race card all the way through," the  NY Post quoted a person it said has worked with Sharpton as saying. "He just keeps asking for more and more money."

The NY Post cites a New York state inspector general's report on Plainfield Asset Management, which in 2008 gave $500,000 to Education Reform Now, which in turn gave the money to NAN.

The money was intended to promote "educational equality," but it was given at the same time Plainfield was part of a group, Capital Play, trying to build a racetrack and casino in Queens.

Plainfield denied the money was intended to keep Sharpton quiet, but a year later NAN was given another $100,000 from AEG, which had taken over for Capital Play, as a battle over the company's licensing was brewing.

As reported in the NY Post, the inspector general's report cited an email between two AEG employees in 2009 claiming that Sharpton had lobbied hard on the company's behalf with then-Gov. David Patterson.

Sharpton has denied taking any action on the casino's behalf, AEG saw its payments as a way of keeping Sharpton from criticizing them and hurting their efforts, the Post quoted a person it said was familiar with the situation as saying.

Many companies have paid NAN, including American Honda, which was targeted by Sharpton in 2003 for not hiring enough minorities in management. Two months later, the company met with Sharpton and began sponsoring events put on by NAN. Sharpton's protests stopped.

In 2008 Sharpton also got a $25,000-a-year consulting job with Pepsi after threatening a boycott  because he said their ads did not include black people.

General Motors for six years resisted Sharpton's requests for money, but relented after Sharpton threatened a boycott over the closing of a black-owned dealership in The Bronx.

Sony Pictures has not announced any donations to NAN after meeting with the movie studio's co-chair Amy Pascal, but Sharpton also has not given his support.

The recent hack of Sony Picture's computer system revealed racially-tinged emails Pascal wrote wondering whether President Barack Obama liked some of the company's movies – all of which were about African-Americans.

"I have had no discussion with her about money," Sharpton told The NY Post. "There was never even a remote discussion about money."


But he did say soon after the meeting, "The jury is still out on where we go with Amy."


If corporations wanted to ever stop playing along, they’d have the Obama administration to deal with. Sharpton is an Obama advisor, having paid more than 84 visits to the White House.

Sharpton operates under the guise of protecting and supporting blacks while he enriches himself and dodges the IRS. Sharpton, with ties to organized crime, has built his career on racial hatred and divisiveness. He deserves to be in prison. Instead, he’s a White House advisor.

Al Sharpton has spoken about the false outrage of "White Privilege", yet it seems good old Al has the "Sharpton" privilege.
Posted by Ronald Dwyer at 12:27 PM