Why Did Hillary Lose? 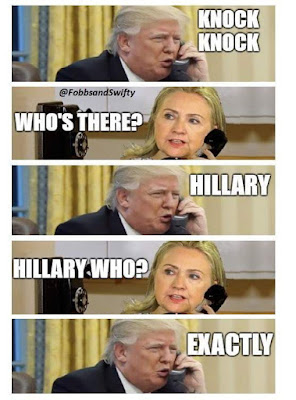 I still haven't figured out why Hillary lost.

Was it the Russian uranium deal? or was it wikileaks ? or was it Podesta ? or Comey ? or was it a sexual predator husband ? or was a staff's husband Wiener immoral pictures ? was it subpoena violation? or was it the corrupt foundation ? or was it the congressional lies ? or was it the Benghazi bungle ? or was it pay for play ? or was it travel gate scandal ? or was it whitewater scandal ? or the Cattle Gate scandal ? Or the Trooper Gate scandal ? Or was it the $15 million for Chelsea's apt bought with foundation money ? Or Comey's investigation ? Or her husbands interference with Loretta Lynch and the investigation ? Or was it stealing debate questions ? Was it forensically deleting 30,000 emails ? The secret server in her house? Was it the Seth Rich murder ? Was it calling half the USA deplorable ? Was it the underhanded treatment of Bernie Sanders ? Was it the Vince Foster murder ? The Jennifer Flowers assault ? The Jennifer Flowers settlement ? The Paula Jones law suit ? The $800,000 Paula Jones settlement ? The lie about taking on sniper fire ? The impeachment ? The 6 billion $ she "lost" when in charge of the state dept ? The 10 million she took for the pardon of Marc Rich ? Or was it because she is a hateful & lying? Stealing from Haiti? Unethical lawyer who got fired from her 1st job? Defending a Chester?

Gee, I just cant quite put my finger on it, but it seems to be right in front of me.
Posted by Ronald Dwyer at 11:03 AM No comments: