A story is emerging out of a Oxford High School, in Oxford Michigan, that their principle - Steven Wolf - is telling students they can not wear any patriotic clothing.  This includes the the American Flag, The Gadsen Flag (Don't Tread On Me), anythng that says "Make America Great Again" and anything that promotes Donald Trump.

A student who wrote to WJR Radio AM 760 in Detroit called into the conservative Frank Bechmann Radio Show Friday morning asking for help.

The student says that students have been accosted by their Principle Steven Wolf.  The student also told Bechmann that the Dean of Students has been bullying and reprimanding students that wear any patriotic clothing.

A representative from the School , not principal Wolf, came onto the station today to say the story isn't true and that the principal was wearing an American flag shirt to school today. Perhaps caught red handed?

A review of Steven Wolf's twitter account @SteveWolfeud shows events at Oxford School but also shows that he supports the Climate Change hypothesy with a retweet of  liberal scienctist and TV host Niel DeGrasse Tyson. 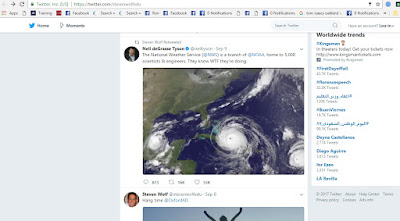 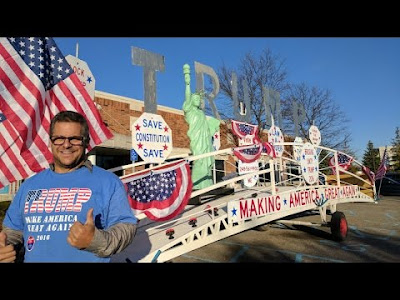 PLEASE WATCH AND SHARE, Many of you have probably seen the Trump Unity Bridge Mobile. The Trumps have been on this display. Today in Alexandria Virginia between 8-9am his Bridge Trailer and Rob Cortis had his  personal vehicle were destroyed by Antifa Thugs. This has been a labor of love by Rob Cortis who is from Livonia Michigan. Rob takes his Trump mobile around the country which is why he was attacked today . If you would like to give a big FU to the Liberals and Antifa, consider helping Rob Cortis and his message to spread Trumps Message. You can help by contributing here ---> https://www.gofundme.com/trump-unity-bridge-tour


How the Unity Bridge began

In February 2016, as the presidential election heated up, Pope Francis urged Trump to build bridges rather than walls.

The Pope's plea inspired Cortis to repurpose an estimated 5-ton steel bridge that once crossed a creek on his former property. He put an axle and wheels on the bridge and decorated it with messages calling for order and unification, as well as a miniature Statue of Liberty and a mounted Harley Davidson motorcycle to symbolize American manufacturing.

He included Trump's name on the float and the Unity Bridge was born. Cortis said the bridge symbolizes the need to bridge the gap between the diverging parties and represents what Cortis believes is missing from American culture.

The messages appearing on the bridge are sourced from more than 40,000 miles of travel and interacting with people across the country from varied racial and ethnic backgrounds, Cortis said.

Cortis said when he parks the bridge at a hotel or other location, people are curious about it and it gives him a way to deliver his message. 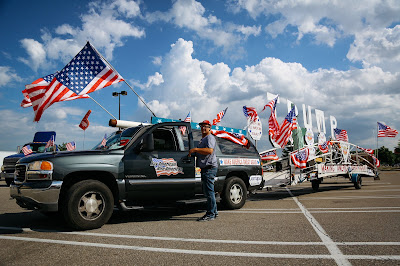 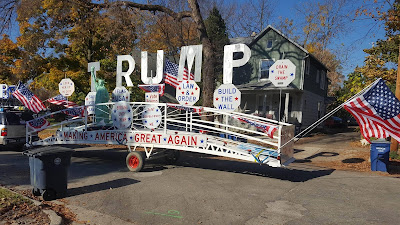 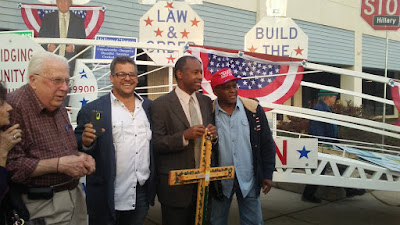 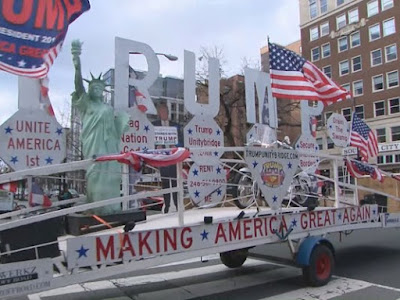 Posted by Ronald Dwyer at 12:43 AM No comments:

Why DACA must end 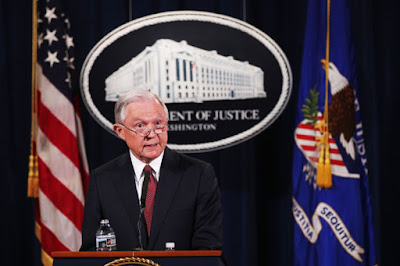 In California, if 3.5 million illegal aliens moved back to Mexico, it would leave an extra $10.2 billion to spend on overloaded school systems, bankrupt hospitals, and overrun prisons. It would leave highways cleaner, safer and less congested.

In Colorado, 500,000 illegal migrants, plus their 300,000 kids and grandchild would move back “home,” mostly to Mexico. That would save Colorado an estimated $2 billion (other experts say $7 billion) annually in taxes that pay for schooling, medical, social-services and incarceration costs. It means 12,000 gang members would vanish out of Denver alone.

Colorado would save more than $20 million in prison costs, and the terror that those 7,300 alien criminals set upon local citizens. Denver Officer Don Young and hundreds of Colorado victims would not have suffered death, accidents, rapes and other crimes by illegals.

Denver Public Schools would not suffer a 67% dropout/flunk rate because of thousands of illegal alien students speaking 41 different languages. At least 200,000 vehicles would vanish from our gridlocked cities in Colorado. Denver’s 4% unem ployment rate would vanish as our working poor would gain jobs at a living wage.

In Florida, 1.5 million illegals would return the Sunshine State back to America, the rule of law, and English.

In Chicago, Illinois, 2.1 million illegals would free up hospitals, schools, prisons and highways for a safer, cleaner and more crime-free experience.

If 20 million illegal aliens returned ‘home,’ the U.S. Economy would return to the rule of law. Employers would hire legal American citizens at a living wage. Everyone would pay their fair share of taxes because they wouldn’t be working off the books. That would result in an additional $401 billion in IRS income taxes collected annually, and an equal amount for local, state and city coffers.

Here are 14 reasons illegal aliens should vacate America, and I hope they have forwarded over and over again until they are read so many times that the reader gets sick of reading them:

The illegal aliens in the United States have a crime rate that’s two and a half times that of white non-illegal aliens. In particular, their children, are going to make a huge additional crime problem in t he US.
During the year 2005, there were 8 to 10 MILLION illegal aliens that crossed our southern border with as many as 19,500 illegal aliens from other terrorist countries. Over 10,000 of those were middle-eastern terrorists. Millions of pounds of drugs, cocaine, meth, heroin, crack, guns, and marijuana crossed into the U.S. from the southern border.

The National Policy Institute estimates that the total cost of mass deportation would be between $206 and $230 billion, or an average cost of between $41 and $46 billion annually over a five year period.
In 2006, illegal aliens sent home $65 BILLION in remittances back to their countries of origin, to their families and friends.

The dark side of illegal immigration: Nearly one million sex crimes are committed by illegal immigrants in the United States!
Total cost a whopping $538.3 BILLION DOLLARS A YEAR!   I AM NOT AGAINST LEGAL IMMIGRATION BTW!!!
Posted by Ronald Dwyer at 8:45 AM No comments:

Email ThisBlogThis!Share to TwitterShare to FacebookShare to Pinterest
Labels: DACA

The screen shot below was seen by Naples, Florida residents and captured by the Earth Cam web cam located at the Naples Pier around 2:40PM on Friday September 8th, 2017

Is it the face of God as many are believing? 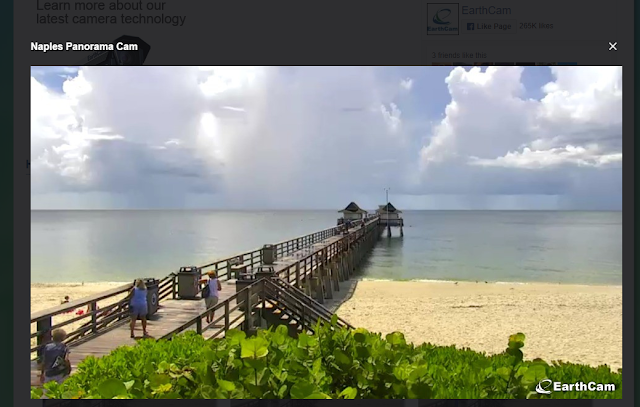 Posted by Ronald Dwyer at 3:10 PM No comments: 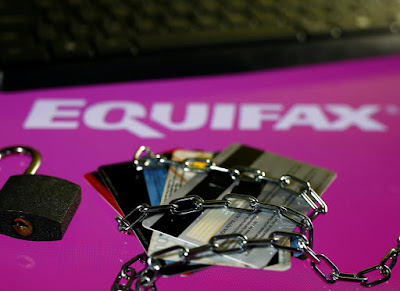 After Equifax’s massive data breach, some customers are thinking twice before accepting the credit bureau’s help.

After a data breach that impacted a potential 143 million U.S. adults, created a website that would allow consumers to check if they were affected. Customers who were told their personal information may have been impacted were given the following message: “Click the button below to continue your enrollment in TrustedID Premier.” 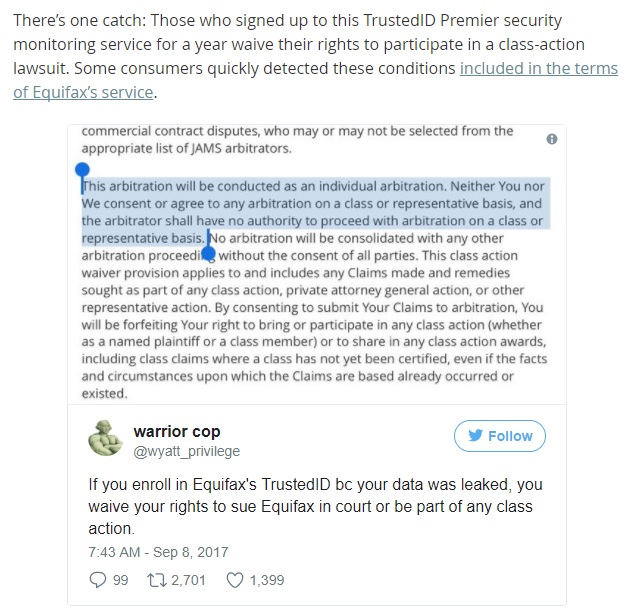 Equifax’s terms require “arbitration of disputes” and “a waiver of the ability to bring or participate in a class action, class arbitration, or other representative action.” The terms were written in block capitals. However, experts say research has shown that customers rarely read the terms and conditions when signing up for services. (The company was not immediately available for comment.)

“Customers are between a rock and a hard place,” said Lisa Gilbert, the vice president of legislative affairs at Public Citizen, a nonprofit based in Washington, D.C. “In order to protect your identity you sign away your right to band together and protect yourself with others who have been harmed. It’s a corporate Catch 22.”

What’s more, a proposed class-action lawsuit has already been filed. Late Thursday evening, Bloomberg News reported, plaintiffs Mary McHill and Brook Reinhard, who live in Oregon, filed a suit. A lawyer who is part of the team that filed the class-action suit told Bloomberg it will seek as much as $70 billion in damages nationally.
Posted by Ronald Dwyer at 2:30 PM No comments:

OVER 1/2 OF AMERICAN'S IDENTITY STOLEN BY EQUIFAX BREACH 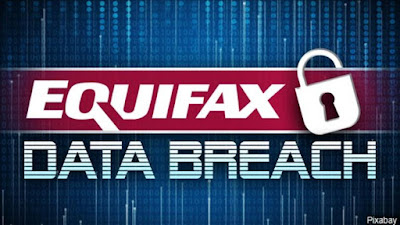 YOUR PERSONAL DATA IS LIKELY COMPROMISED! WHY WEREN'T WE ADVISED 3-4 MONTHS AGO WHEN THIS HAPPENED?

Equifax says a giant cybersecurity breach compromised the personal information of as many as 143 million Americans — almost half the country.

Additionally, Equifax said that credit card numbers for about 209,000 U.S. customers were exposed, as was "personal identifying information" on roughly 182,000 U.S. customers involved in credit report disputes. Residents in the U.K. and Canada were also impacted.

The breach occurred between mid-May and July, Equifax said. The company said it discovered the hack on July 29.

The data breach is one of the worst ever, by its reach and by the kind of information exposed to the public.
Posted by Ronald Dwyer at 2:25 PM No comments:

Trump Pardoned Sheriff Arpaio But Did You See This... 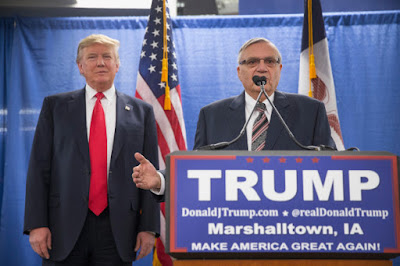 Hey, remember that time Donald Trump's son killed 21 dogs in a kennel because of his negligence and then used his political influence to get the case dismissed?

Remember when Mike Pence's kid was a member of Antifa?
...... Oops that was Tim Kaine's kid.

Remember when Senator Tom Cotton used his political power to free a criminal  and then that guy sexually assaulted a child?
...... Oh, my bad, that was Senator Chuck Schumer.

Remember when Trump's daughter Ivanka Trump used money intended for the Haitian relief effort to pay for her extravagant wedding?
........ Sorry, my mistake, that was Chelsea Clinton.

Democrats and the liberal media would destroy anyone running in a Conservative campaign with this kind of scandal as baggage.
These incidents were barely even covered by the media.

But, but, but, President Trump pardoned Joe Arpaio!


Once scoffed at, as many believed it was a precision Sonic attack that killed famed Conservative Author Andrew Brietbart in 2012, Sonic attacks are now being reported in the main stream news.

Nineteen Americans are suffering from a range of symptoms, including mild traumatic brain injury and hearing loss, related to mysterious "sonic harassment" attacks in Cuba.

Previously, U.S. officials said the incidents started in December 2016 and ended this past spring. But State Department spokesperson Heather Nauert revealed Friday that a new incident occurred in August and is now part of the ongoing investigation. 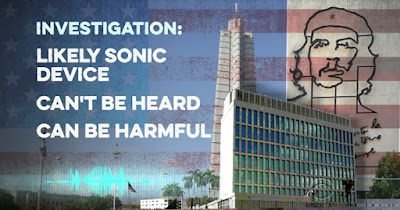 "We can’t rule out new cases as medical professionals continue to evaluate members of the embassy community," warned Nauert, who has described the situation as "unprecedented."

The U.S. government, including the FBI, continue to investigate who and what are behind the incidents, but with no firm answers so far.

The American Foreign Service Association said Friday that its representatives met this week in Washington, D.C., with Foreign Service Officers posted at the U.S. embassy in Havana who have faced diagnoses including mild traumatic brain injury and permanent hearing loss, but also loss of balance, severe headaches, cognitive disruption and brain swelling.

Traumatic brain injury is caused by a violent blow or jolt to the head or body that may cause temporary dysfunction of brain cells or more lasting damage, according to the Mayo Clinic. Symptoms can be immediate or appear days or weeks later, ranging from loss of consciousness or confusion to sensory problems, memory loss, or headache and nausea.
Posted by Ronald Dwyer at 11:33 PM No comments: