Posted by Ronald Dwyer at 10:01 PM No comments: 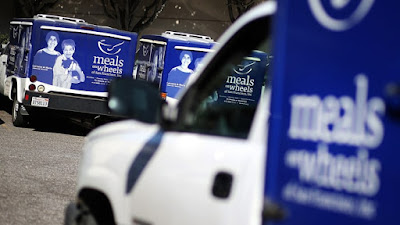 The left propagandists  have been pushing out a false narrative saying that President Donald Trump is killing the program to help the elderly and the poor known as Meals on Wheels.  Meals on Wheels provides low cost to free meals to those in need.  However what Meals on Wheels receives from the U.S. Department of Health & Human Services may surprise you.  President Trump's budget proposal will NOT kill the Meals on Wheels program.

READ THE MEALS ON WHEELS STATEMENT TO CLEAR THINGS UP: “The nationwide Meals on Wheels network, comprised of 5,000, local, community-based programs, receives 35% of its total funding for the provision of congregate and home-delivered meals from the federal government through the Older Americans Act, administered by the U. S. Department of Health and Human Services, Administration for Community Living. Other federal funding sources that support Meals on Wheels program operations may include the Community Development Block Grant, Community Services Block Grant or the Social Services Block Grant. In addition, programs rely on contributions from state or local governments, private donations and other resources to cover the rest, demonstrating one of the best examples of a successful public-private partnership. Meals on Wheels America, the largest and oldest national organization representing senior nutrition programs across the country, receives only 3% of its funding from the government, specifically to run the National Research Center on Nutrition and Aging.
Posted by Ronald Dwyer at 10:02 PM 1 comment:

The group is run by Matt Maddock, who unsuccessfully tried to become the 11th Congressional District Republican Committee Chairman, by hijacking the Oakland County Republican Convention in January.  Mr. Maddock would have faced a race against current 11th Congressional District Republican Committee Chair Deb O'Hagan.  Because of his behavior with the violation of Robert's Rules and Michigan Republican Party Rules, Maddock's portion of the convention was thrown out and he ended up with just a few votes at time of Chair election. 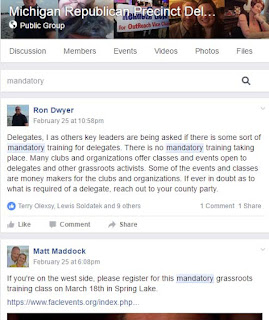 Continuing with his quest for power, and in this author's opinion a sore loser, Mr. Maddock aided by his wife Meshawn formed the 11th Congressional District Majority Committee.  The name "Republican" was left out of the title as some legal minds have suggested to avoid a potential lawsuit while others have joked that the group is filled with many Libertarians who are following Libertarian leader Peter Schiff's plan to take over the Republican Party through infiltration.

Mr. Maddock has a history of either intentionally misleading delegates or using poor use of words mislead the delegates. A couple of weeks ago a post was made in the Michigan Delegate Facebook Group about a training session that was available to delegates.  Since Mr. Maddock used the word "mandatory" in his promotion in a Delegate group this confused many and though they had to sign up and pay for this training.  This training was being put on by a group Mr. Maddock supports.

Quite few delegates were confused and upset by an e-mail received by the 11th CD Majority Committee, which to this day the title doesn't make sense, majority of what?  One has stated to this author just that, "Majority of What"  They have yet to win an election, have a successful fund-raising campains and they typically lose in the primary.


Last Thursday’s meeting at the Emagine theater was a hugely successful night. We elected our 11th District Majority Executive Board and District Committee. We also set up 5 sub committees:Our Fundraising Committee, Candidate Recruitment Committee, Legislative Committee, Community Outreach Committee and lastly our Bylaws Committee.We also decided on the date of the first 11th Majority District Committee Meeting, March 20 at Buffalo Wild Wings in Novi in the closed in patio. 6:00 pm for dinner, 7:00 for the meeting. At that time we will break  into our subcommittees so as to decide on sub-committee chairs and other relevant issues pertaining to each subcommittee.Some who reside in the 11th have asked if it is too late to join a committee, the answer is there is always room on the sub-committees for people interested in helping!You do not need to be on a committee to attend the meetings.Please join us at:Buffalo Wild Wings on March 20th6:00 pm for social/dinner, 7:00pm for the meeting Please also check out the registration for FACL Training on April 8Featuring energetic field instructor Shawn Dow from Colorado.If you’re interested in making the most effective difference in the political world you are going to want to attend FACL (Foundation for Applied Conservative Leadership) Training, held right here in Walled Lake.Find out more here Sincerely,Kathy ChestnutSecretary of the 11th District  Majority Committee


YOU ARE INVITED to a11th CDRC STRATEGY SESSION ! Enjoy some food and beverages; Meet fellow Republicans;Share your ideas for a winning 11th!you know you have an idea :-) To make it easier for you to attend, we divided the district into three regions.
Attend the strategy session closest to you or one that fits your calendar!
RSVP to:   rsvp@migop11.orgplease include names of those attending and region  (not mandatory but will help plan for food) A new program will be announced at the strategy sessions and there is an active role for everybody interested!  Politically yours,
Deb O'Hagan and your 11th CDRC leadership team!

There are numerous clubs that any can belong to and that includes the club of the 11th CD Majority committee.  Ask questions though as to how your time, talent and treasure will be used.  The real 11th Congressional District Republican By-Laws state that the committee as a whole shall remain neutral in contested Republican Primaries and will support/endorse the winner of the Republican Primary in the November General Election.  Will the 11th CD Majority do the same? Research the group you wish to join before you make a mistake and realize you wasted your time talent and treasure for something that may not be what you thought.  Also get it in writing, see the by-laws.  In politics few tell the truth especially if they are power and money hungry.
Posted by Ronald Dwyer at 1:21 PM 1 comment:

Legal Troubles For A Former State Rep Candidate With A History Of Miscues?

Elizabeth Smith, daughter of former embattled State Senator Richard Fessler and Marilyn Fessler , ran for the Michigan State House seat in district 44 (White Lake) in 2014.   She ended up losing to current Representative Jim Runstead.   The race that year went quite negative and we covered that negativity in a article  as well as some unbelievable turn of events for Ms. Smith (we suggest you read the blog post in the link above)

Now Elizabeth Smith is a Trustee for the Township of White Lake and her troubles seem to be following her there.

In the video a mother of a 2nd grader, Bethany Danowitz who is the school PTA president, described what transpired at Houghton Elementary  on Valentines Day 2017, Ms Danowitz witnessed Ms. Smith berating the school principal in front of students.  When the situation escalated she was asked to leave by administrators, she refused and White Lake police were called to escort her out of the school.

According to Ms Danowitz she also had a run-in with Ms. Smith at a Halloween party in 2016 where Ms. Smith "got in her face" and was berating her as well as the teacher in the classroom in front of students.

Current State Representative Jim Runestad issued the following statement on facebook "That is despicable behavior for a public official, especially in front of little children."

Perhaps if the alleged bullying and disturbing the peace is true, the apple wouldn't fall to far from the cart.   This writer himself felt the Fessler family wrath when approached by Marilyn Fessler at the 2014 August Michigan State Convention.  It was at that point Ms. Fessler approached this author and advised that this author was now on a list for covering the 44th District race, particularly the miscues of Elizabeth Smith and her campaign.  This author though did ask Ms Smith's mother Marilyn Fessler,   "What List? A Hit List? Is that a threat?"

You can watch the irate parents chastise and inform the rest of the board as to what transpired at the elementary school Ms Smith was at in the video below: