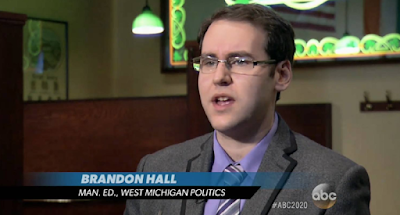 West Michigan Politics blogger, 27-year-old Brandon Hall of Grand Haven man was sentenced to 30 days in jail and 18 months probation for election fraud he committed while trying to help a Grand Haven attorney get his name on the ballot for a 2012 election.


Hall was accused and admitted to forging signatures on petitions for then judicial candidate Chris Houghtaling.


He was charged with 10 counts of election law forgery in 2013. He successfully appealed the case back down to misdemeanors in Ottawa District Court, Ottawa County Circuit Court and the Michigan Court of Appeals.


Hall said, after the high court's decision that the case should be tried as a felony, he resigned himself to the fact that he would likely spend some time in jail.


Jurors came back with a guilty verdict on all counts after one hour of deliberation back in November.

Posted by Ronald Dwyer at 10:23 PM No comments: