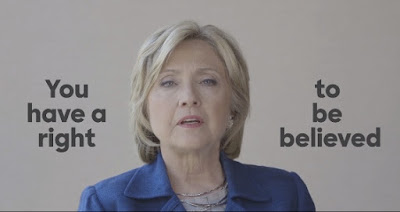 Hillary Clinton says that we should hear and believe woman that say that they have been a victim of a sexual crime.

Does this also apply then to Hillary Clinton's husband who has been repeatedly accused of sexual misconduct?  Besides having an admitted affair with Monica Lewinsky, Bill Clinton’s accusers include:

Paula Jones: A former Arkansas state employee, Jones sued Bill Clinton in 1994 for sexual harassment. Jones claims that in 1991 then Arkansas Governor Bill Clinton propositioned and exposed himself to her in a Little Rock hotel. Clinton eventually settled with Jones out of court for $850,000, but never admitted to any wrongdoing.

Juanita Broaddrick: Broaddrick, a former nursing home administrator, alleges that Bill Clinton, who was running for Arkansas governor at the time, raped her in an Arkansas hotel room in the spring of 1978.

Kathleen Willey: Willey was a White House volunteer aide who, in March of 1998, alleged on the TV news program 60 Minutes that Bill Clinton had sexually assaulted her during his first term as President.

Eileen Wellstone: Wellstone, an English woman, alleges that Clinton sexually assaulted her after she met him at a pub near Oxford University where Clinton was a student in 1969.

Carolyn Moffet: Moffet was a legal secretary in Little Rock in 1979, said she met Governor Clinton at a political fundraiser and was invited to his hotel room. Moffet alleges that she fled the hotel room after Clinton demanded she perform sex acts on him.

Elizabeth Ward Gracen: A Miss Arkansas who would go on to win the Miss America contest in 1982, Gracen alleges that she was forced by Clinton to have sex with him shortly after she won the Miss Arkansas competition.

Becky Brown: Becky Brown was Chelsea Clinton’s nanny. L.D. Brown, an Arkansas State Trooper and Becky’s husband, claims that Clinton attempted to seduce her in while the two were in governor’s mansion.

Helen Dowdy: Dowdy, the wife of one of Hillary’s cousins, alleges that in 1986 Bill Clinton groped her on the dance floor of a wedding.

Cristy Zercher: Zercher was a flight attendant aboard Clinton’s campaign jet from 1991-1992. Zercher told the Star magazine that Clinton groped her for over 40 minutes.
Posted by Ronald Dwyer at 10:16 AM No comments: 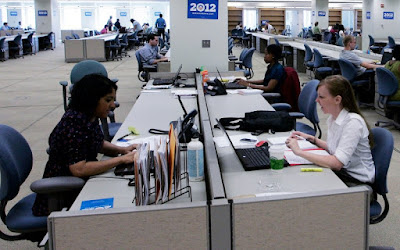 If you’re a person of color hoping to get hired by a political campaign, here’s the ugly truth: You’ll probably get paid less than your white counterparts, if you’re even hired at all.

On both sides of the aisle, there is a racial pay gap in campaign politics. Asian, Black and Latino staffers are paid less than their white counterparts, according to an analysis by the New Organizing Institute.

And a recent study by PowerPAC+, funded by a major Democratic donor, revealed that less than 2 percent of spending by Democratic campaign committees during the past two election cycles went to firms owned by minorities.

Political operative Michael Gomez Daly worked on two congressional campaigns in 2012 with similar budgets. On one campaign, Daly, who describes himself as “a very light-skinned Hispanic,” was brought in as a field director, primarily for his skills as a Latino operative who could reach out to the Hispanic community. On the second campaign, where they did not know he was Hispanic, “I just came in as ‘Michael Daly,’ instead of ‘that Latino operative,’” he said. “Right off the bat they offered me twice the amount for the same job.”

Most of the operatives interviewed for this article, all of whom have years of experience in campaign politics, said they had to make an early, conscious decision to avoid being pigeonholed as a specialist in minority outreach. For minority campaign staffers, they said, the path to enduring success lies in saying “no” to jobs like that early on in your career.

“It was pretty clear to me early on that you can get put in a box pretty quickly. You get offers for jobs: African-American outreach, Asian-American outreach. Oftentimes when you start doing that work, it’s hard to get out of it,” said Sujata Tejwani, president of Sujata Strategies, a Democratic firm.

Added Rodell Mollineau, a past president of the progressive tracking organization American Bridge, “As a person of color [at the start of your career], you’re always put in situations where a primary part of your job is communicating with or working with other people of color.”

The NOI statistics on the campaign race pay gap compare all staffers of each race, and average out the salaries. One of the explanations for lower minority wages could be that they tend to be represented in lower-paying campaign roles.

Conventional campaign wisdom is that voters best respond to pitches made by those who are similar to them. But this limits the roles that minority campaign staffers are able to play.

“There’s a presumption that minorities can’t manage ‘white’ issues. There’s a presumption that white voters won’t like to see a black press secretary, or that white voters won’t want to see an African-American or Latino political director,” Simmons said. “There’s just a general prejudice factor,” he said, that’s based in an antiquated understanding of race relations.

The issue of race can sometimes create doubts even in the minds of the most experienced operatives. “If the swing population [in an election] are white, you do wonder if you’re going to get hired,” said Tejwani, an Indian-American with decades of experience on campaigns.

The hidden prejudices present in broader American society are part of the problem. One operative compared campaigns to business startups that are constantly shutting down and restarting. With deadlines looming, top campaign staff may lean subconsciously on stereotypes about minorities.

Said one operative with experience in Virginia and Georgia: “The structural racism that happens in the United States, and how it is reinforced by a lot of presumptions, don’t get dropped because you’re working on a campaign.”

Source: The Daily Beast
Posted by Ronald Dwyer at 10:28 PM No comments:

Why Gallup's Most Admired Means Absolutely Nothing 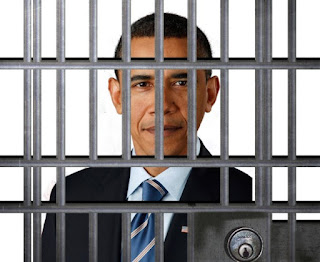 The results of Gallup's "Most Admired" poll are the result of telephone interviews conducted Dec. 2-6 using a random sample of 824 adults from all U.S. states and the District of Columbia. There was a minimum quota of 40 percent landline participants and 60 percent cellphone participants.

Now keep in mind that Gallup is supplying the interviewees with a list of names as well. 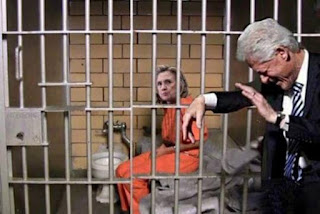 These numbers hardly depict reality. In reality one should be embarrassed by such small numbers.

So when you see the liberals boasting about Obama being the most admired man and Hillary as the most admired woman, it is really a desperate attempt to fool the masses that really think otherwise of the so called "most admired".

Is Trey Gowdy Actually A Fraud?

First Gowdy said all confederate flags should come down.

Then Gowdy voted for Boehner as Speaker of the House.

Followed by Gowdy’s Benghazi hearings that were a complete failure as nothing has come out of them.

After voting for Boehner, Gowdy introduced the nomination of Paul Ryan as the new Speaker of the House.

Now Gowdy is backing the gang of 8 Amnesty Sponsor Rubio for president. The gang of 8 was McCain, Lindsey Graham and Rubio pushing to give blanket welfare checks, and grant citizenship to, an estimated 30 million illegal alien lawbreakers.  Rubio’s voter absenteeism is the worst in the Senate.

Is he being threatened or is he showing his true colors?
Posted by Ronald Dwyer at 2:05 PM No comments:

Hillary, that's not a president.  She's not taking us to the --  Everything that's been involved in Hillary has been lawsuits.  You take a look.  Even a race to Obama, she was gonna beat Obama.  I don't know who'd be worse.  I don't know.  How does it get worse?  But she was gonna beat, she was favored to win, and she got schlonged.  She lost.  I mean, she lost.  But I watched her the other night.  It was hard.  It was really hard.  'Cause there were a lot of other things on better, including reading books and reading financial papers, which I actually enjoy reading."

Anybody with even one brain cell could tell that Trump was meaning she got beat and she got beat bad in that election.

When Donald Trump said that Hillary Clinton got schlonged by Barack Obama in 2008, it wasn't the first time it was used the term was used in politics.

In 2011 Neal Conan, host of NPR’s Talk of the Nation, said in said during the broadcast of the show that the 1984 Democratic ticket of Walter Mondale and Geraldine Ferraro “went on to get schlonged at the polls.”

Then in 2006 during a segment on Fox News, Dick Morris warned that President George W. Bush was “going to get schlonged” in the midterm elections.

Going even further back, the phrase made an appearance in New York City collegiate politics. The Daily Mail uncovered a 1967 article in the student newspaper of the City College of New York in which Ellen Turkish, a candidate on the losing slate for student council, said, “We got schlonged.” (As Ellen T. Comisso, she would go on to a distinguished career as a political scientist.)

Posted by Ronald Dwyer at 7:10 PM No comments:

Marco Rubio's staffers seem to understand that this race is likely to boil down to a race between their employer and Ted Cruz, the senator from Texas. As a result, they apparently feel the need to smear their guy's main rival. 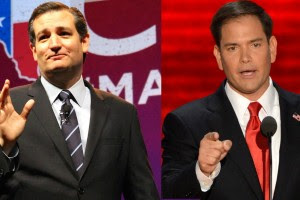 They do that by spreading a video in which Ted Cruz appears to support amnesty -- at least in some cases and for some people.

Shocking, right? Ted Cruz attacks Rubio for being a pro-amnesty guy, but he shared that opinion only a few years ago! Oh no, what a liar! What a hack!

There's just one minor problem: as former Cruz staffer Amanda Carpenter explains, Ted didn't actually support amnesty. He only put this amendment forward in order to show to voters that the Gang of 8 wasn't telling the truth about whether or not their amnesty plans would eventually result in a path to citizenship for illegal aliens: 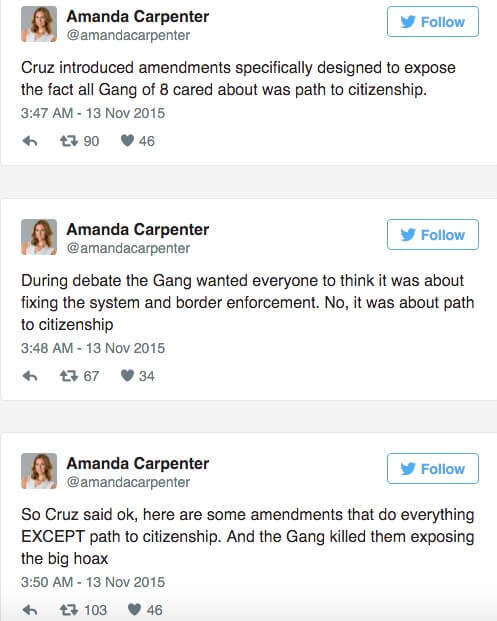 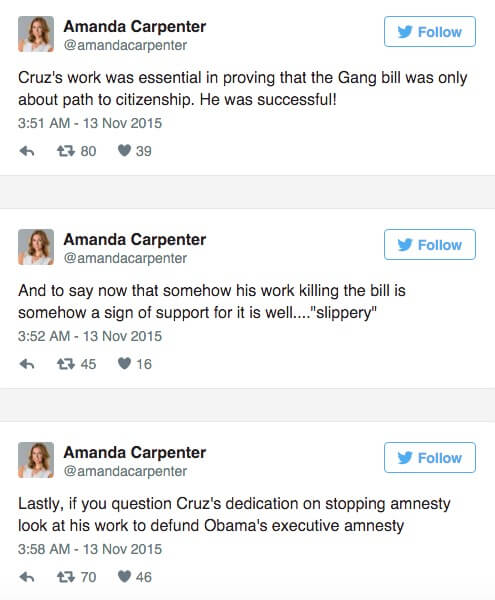 In other words, Rubio's staffers are using a trick Cruz used to expose their boss' secret plans to give illegal aliens a path of citizenship against him. They're turning it upside down, inside out, and deceiving conservatives in order to destroy a candidate who is and has always been against amnesty.

This is how the Rubio folks roll: it could've come straight out of Karl Rove's playbook. I guess that proves that Rubio did indeed learn a lot from Jeb Bush; more than he's willing to admit.

Posted by Ronald Dwyer at 9:20 AM No comments: 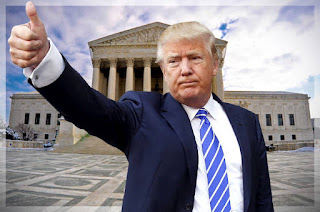 Turns out Donald Trump is right again. According to legal experts, it is Constitutional to ban any person or group of any nationality, religion, political doctrine, etc, The Constitution does not offer protectional guarantees to non-citizens. There is historical precedence as of June of this year of this fact.