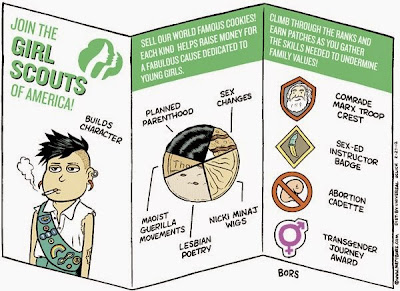 Being a girl is about to become optional for future Girl Scouts. The organization will now accept boys if who consider themselves a girl, bringing the transgender debate into the forefront.

Speaking with my brother-in-law yesterday at church, he is trying desperately to keep this nonsense away from his younger girls.

They are starting to ask questions from things they see on TV.  Such as why and how a man, Bruce Jenner, is becoming a woman.

Curriculum that the Girl Scouts teach is also concerning.

While many will argue that Girl Scouts is simply respecting the beliefs or non-beliefs of its members, who come from varied backgrounds, this "tolerant" oath denies the One True God, allowing a girl to swear her oath to a tree or an animal or anything else she chooses to substitute for the word "God."

What is also disturbing is  the treatment of our nation's flag at the 2008 Girl Scout National Council Session and Convention.  The traditional flag ceremony was trashed, as was the playing of our National Anthem.  Flags of all nations were brought in bunched together to Chicago and Earth, Wind and Fire tunes.  That just doesn't' sit well with this Army wife.

My greatest concern lies with the Girl Scouts curriculum called "Journeys."  This new program steadily leads the girls down a path of moral relativism toward the New Age.  (An excellent review of "Journeys" can be read here.)  Having read through the highlights on the Girl Scouts website, I'm left with the distinct impression I've just joined a Zen-yoga, environmental, defeat global warming, free choice, girl-power, modern feminist think-tank.  There's lots of talk about "women's issues", environmental issues, empowerment, and the new "globalism", but no mention of God and very little of country.

By the time the girls reach grades nine and ten, they are introduced to "Girltopia."  This book emphasizes the disparity between the sexes, particularly when it comes to jobs and wages, and asks, "How could everyone create a Girltopia?"  The text then praises three different books on the subject of utopias, including, "The Gate to Women's Country," by feminist author Sheri S. Tepper, who also happens to be the Executive Director of Rocky Mountain Planned Parenthood.

In grades 11 and 12, the curriculum is called "Your Voice, Your World: The Power of Advocacy."  The most disturbing part is that at the bottom of each page is a "Voice for Good"  featuring women meant to be role models for the girls to follow.  More than 50 women are named, and only 3 are women of faith, including Mother Teresa.

Billie Jean King: retired tennis champion, sued for palimony by lesbian girlfriend while she was still married, first prominent professional athlete to come out as homosexual.

Most disturbing of all is Girl Scouts associations with Planned Parenthood.  In 2004, CEO Kathy Cloninger admitted that they partner with PP to bring sex-education programs to troops all over the country.  Planned Parenthood has no interest in abstinence.  It doesn't benefit their bottom line for teenagers to wait for marriage to have sex.  They are financially invested in promiscuity and all the destructive consequences it brings, especially abortion.  And now it seems Girl Scouts' vision of sexual health and freedom mirrors Planned Parenthood's.  Is that your vision for your daughter?

If you want your daughter to learn the skills of a Girl Scout while keeping her love of herself, God and Country, I would suggest American Heritage Girls.
Posted by Ronald Dwyer at 9:40 AM